It seemed a pity that clubmates should have to face each other on their way to the final. And this was a game worthy of a final. Superb drawing by Kelvin Scott and ferocious driving by Gary Lawson. A masterclass!!! Scott won 21 – 15.

In what proved to be a gripping final, Kelvin Scott was in devastating draw form in his defeat of Tony Grantham, a former singles champion himself.

A stunning semi-final performance saw Scott defeat Royal Oak’s Mike Galloway.
Brimming with composure, the Elmwood Park campaigner seemingly had a solid game plan to outdraw his opponents, drawing his way through to victory with uncanny accuracy and precision and executing the occasional resting shot when required. A gritty fight back from Grantham in the final kept the game entertaining for the watching crowd. It proved to be Scott’s day, as won game 21-14, some 24 years after collecting his maiden national singles title.
.

In a commanding display of bowls Sandra Keith and Bev Morel combined to take out the women’s pairs 20 – 8. Racing out to a commanding lead, Keith and Morel continued to pile on the pressure, with Morel leading from the front and controlling proceedings throughout.

Several last gasp efforts from Hendra and Bruce at the latter stages of the game were not enough to deny both Keith and Morel their fourth national open titles respectively, with Keith previously winning the singles in 2012, the pairs in 2013 and the fours in 2020, and Morel combining with Sherrie Cottle in 2018 to win the pairs, alongside two former fours’ victories in 1995 and 2007.

What a proud moment for the Elmwood Park Bowling Club.
.

Mandy Boyd lost her semi final to Clare Hendra  12 – 21.
It was a case of deja vu when Kelvin Scott and Gary Lawson met in the semi final of the pairs, this time it was Lawson who triumphed.
In the final Lawson went down 11 – 19, a final scoreline suggesting a comfortable victory: but for the vast majority of the match it certainly wasn’t. The first half belonged to Lawson and Grantham but Kelly and Curtin really bowled well in the final ends. Curtin led well and Kelly produced some really superb draw shots.

The Nationals Fours and Mixed Pairs Feb. 24 – Mar 3, 2022.
The national fours and mixed pairs were to be in Taranaki, the fours from February 24 – 27 and the mixed pairs from February 28 – March 3.
Elmwood Park has some representatives partaking and we wished them the best of luck.
Fours: Gary Lawson, Kelvin Scott and Lance Pascoe, Mandy Boyd and Angela Boyd
Mixed Pairs: Mandy Boyd and Lance Pascoe.
Sadly covid put an end to that. 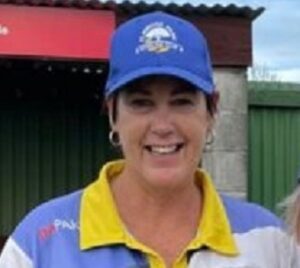 .
.
Pairs: Both our club champion pairs went out in the first round of the champion of champion pairs. Pam Phair and Mary Ann Johnstone lost to Canterbury 2017 16 – 17 while Kelvin Scott and Steve Bowden went down to Allenton 12 – 16.

Fours: The club’s two champion fours team who competed in the Centre’s champion of champions tournament both went out first game. Bev Morel lost to Halswell 8 – 14 while Nathan Glasson went down to Bowls Papanui 11 – 12.

Centre Mixed Fours: Well done to both mixed fours teams of Bev Morel, Jan Shirley, Steve Bowden and Ray Hooper and Paul McKinnel, Pam Phair, Mary Ann Johnstone and Neil Johnstone who have both qualified for post section play. Morel’s team got through post section to play the final against Papanui Club’s Rick Day on finals weekend where they had a close win 14 – 13.

Centre Fours: Surprisingly only three entries with the team of Paul McKinnel, Liam Eathorne, Don Baker and Ian Rule making it through to post section where they won their two games and won their semi final in finals weekend but were defeated in the final 14 – 15 to Burnside’s Richard Hocking. Both ladies teams of Bev Morel and Pam Rowley failed to qualify.

Centre O60 Fours: Congratulations to the two Elmwood Park teams that played in the post section of the O60 fours at Riccarton Racecourse.

Both teams met in the semifinal where Pam Phair, Brian Lyttle, Mary Ann Johnstone and Neil Johnstone were defeated by Bev Morel, Jan Shirley, Bruce Humphreys and Ray Hooper who then went on to defeat the Burnside team skipped by John Mears 17 – 14.


Pre Christmas Highlights.
* The success of both the div. 1 teams in winning the Centre Sevens titles.

This is actually the 2nd time the women and men have both won this top event; the first being some 15 years ago when the women, including current club members and still top bowlers, Mary Ann, Bev and Pam, went on to win the N.Z. title.
* The div 1 2/4s women who won their division.  They followed up their win last year in the 8s by winning this event narrowly prevailing over strong Allenton and Burnside teams.
* The div 1 3/4s men who came second in their division. They may have been a little disappointed!!!
* Men’s double pairs who won their section and rain delayed playoffs in early 2022 which they lost.
* First time since amalgamation an U5 team participated in Saturday interclub.
*  The O60 double pairs teams, EP1 & EP3 who both came 1st in their respective sections. Halswell 1, the eventual winners, defeated EP3 in the first round of playoffs. EP1 defeated Belfast 1 but then went down to Papanui  Club 4 in the semi final.
* EP Blue who held first place in the Edwards Cup competition at the half way stage.
* Men’s Div 3 2/4s with the most wins in their division came a creditable second.
* Selection of Emily Belton as a Bowls Canterbury senior women’s coach.

* The success of both the div. 1 teams in winning the Regional Sevens titles.
What a day, both our women’s and men’s teams won their regional sevens held at Blenheim.

The Elmwood Park Saints came marching into this years National Bowls3Five with nothing, and marched home as champions, after a hotly contested weekend of Bowls3Five.
The Saints team of Lance Pascoe, Kelvin Scott, Mandy Boyd and manager, Gary Lawson defeated the spirited Takaro Tui team of Mark Noble, Sharon Sims and and Steven Toms in the final to claim the championship.
In the semi finals, the Saints snuck past the Stokes Valley Vipers team of Seamus Curtin, Finbar McGuigan and Nicole Toomey by smallest of margins; winning the first set four points to three, and drawing the second set four all.

Local Tournaments
16- 10 – 21
Elmwood Park and Fendalton played their annual match for the Fenwood Duster on a day that was fine and sunny with the wind only appearing towards the end of the afternoon.
President Peter Law and Graeme Paton accepting the Fenwood Duster from Neil Johnstone. A slightly

29 – 1 – 22
The annual match against Burnside was played today resulting in a reasonably comfortable win 10 games to 6 to Burnside. Apparently it as the 42nd match between the two clubs with Burnside now having 22 wins to Elmwood Park’s 20.

16 – 3 – 22 v Rangiora
Rangiora defeated Elmwood Park in their annual tournament.
Two trophies were played for.
Gig Thomas Trophy and the John Emmett Trophy. EP lost both.
None the less an enjoyable day.
.

Special thanks to Don Baker and Gary Lowe who have produced great greens throughout the year; the equal of any in Christchurch. Thanks guys.